No, not a rocket launch. Just my first attempt at astrophotography. Tonight I set up my telescope and camera to take a photo of the waxing half moon. First, the photo itself and then a description of how it was made. 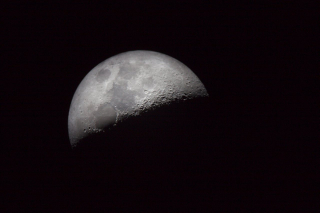 I’ve never seriously tried astrophotography before, so this was a bit of a challenge. My telescope is a simple one. An Orion Starblast 4.5” EQ, which is a very nicely performing beginner’s telescope. I originally bought it because I wanted something inexpensive, easy to use, and lightweight (hence more likely to get used!), but with quality optics, and the Starblast EQ fit the bill.

For the photo, I attached my camera with an eyepiece projection bracket. I used a Celestron 12mm Plössl eyepiece in the telescope. The camera just had my normal lens (Canon EF-S 17-55mm zoom set to ~30mm) attached focused to infinity. Sadly, I forgot to set the f-stop and it was on f/6.3. I could have done better, but my habits kicked in – most of my photos are taken with manual focus lenses that either have a fixed f-stop, or that I almost always leave full open because of low light conditions. Ah well, we learn best from our mistakes.

After initially lining up the telescope using a 20mm lens, I swapped in the 12mm lens with the camera already attached, rechecked the alignment, and started taking photos. There were lots of photos taken in order to get the one above, and I’m still not too satisfied. Focusing was hard, since the light passing through the camera viewfinder made the image a little dimmer and fuzzier than the direct view at the telescope eyepiece, but I could not swing the camera out of the way for focusing: the tripod and head for the telescope are a bit flimsy and the weight of the camera causes the telescope to be pulled slightly out of alignment, causing the Moon to move out of the field of view. Still, after much trial and error I got a few shots that satisfied me.

The view is a bit dim. More exposue tended to leave the brighter parts of the Moon over exposed, so I decided to live with some under exposure. The end result is a bit too dark but for a first try I think it came out well enough.

I have a couple of other camera adapters that I want to try out next – one that lets me attach the camera more solidly to the telescope, though at the expense of not being able to use large eyepieces, and another that lets me eliminate the eyepiece and put the camera at prime focus. Those will be fun to experiment with!