This was a down day for me.  The blisters and soreness and cramps simply could not be ignored.  Mostly I stayed inside and slept, but for a while in the afternoon I set up a chair by the lakeside under the trees and just sat and watched the lake, the birds, and the play of light and shadow as the sunlight filtered through the leaves.  The ever shifting speckles of light and darkness are wonderfully soothing on the eyes and the mind.

I still felt sore, but this being my last full day in Huntsville State Park, I wanted to do something.  So I decided to walk the small portion of the Coloneh trail that I’d not yet been on.  It led further into the campgrounds, towards the primitive campsites.  I had not really taken any photos on this trip (it can be a bit of a chore to lug around my gear, and I just wanted to relax more than anything) so I decided that on this last day I would at least carry my camera on a strap with my short zoom and get a few general shots. 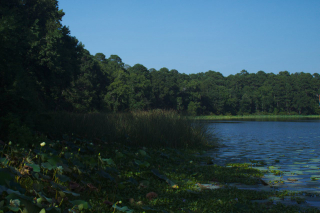 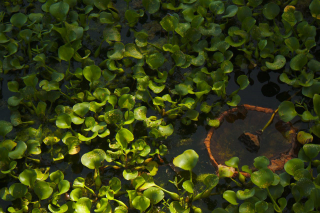 Rather than following the trail away from my campsite, I decided to walk down the road through the campground and then follow the trail back.  Along the way I stopped at a fishing pier and took a couple of photos.  This first is just looking towards the end of one of the three fingers of the lake.  In the foreground you can see the water lilies and cattails that grow in the shallows, and sadly you can also see some water hyacinth.  The second photo shows a detail of that.  This South American native has become a virulent invasive plant in many Texas waterways and lakes, choking out other life and severely damaging aquatic ecosystems.  When I was swimming the other day, I gleefully crushed the bladders on a couple of floating handfuls of the stuff that I came across.

Moving on I came to the trail head, but right there I saw some spider lilies growing.  These are pretty common, but I’ve always thought they were lovely. 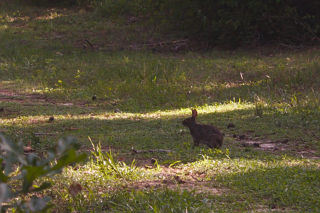 The trail itself was easy – even a bit too easy at one point, as it followed a dirt maintenance road past a small water treatment facility for the campgrounds.  That did, though present one nice photo for me, as there was a rabbit grazing in the road and it was at enough of a distance that it did not spook at my appearance.  Alas, I only had a 18-55mm zoom with me, so I was not able to get a very good photo of it. 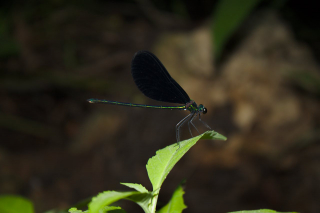 The trail was a short one – a fine thing since I was still very sore – but when I got back to the part I’d been on before, I turned and walked a short distance to where the main road crossed a small stream.  I had noticed some damselflies there the previous day, and I wanted to try an get a photo of them.  It was starting to get dark at this point, and I had to crawl around in the brush and the stream banks to get close enough, but with my flash I was able to get one nice photo.  I believe this is a female ebony jewelwing.  I’ve seen these damselflies every time I have visited this park, but this is the first photo I’ve ever gotten of them.

Finally, I took a shot of this sign as I walked back to camp.  At first glance it seems like an ordinary buried cable warning sign, but look at the phone number: Enterprise 9800.  A named exchange?  Most places in the US had switched to all number dialing by the mid to late 1960’s, so that is a pretty old sign! 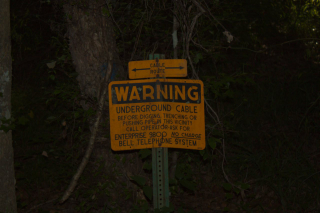 Next: On the Waterfront